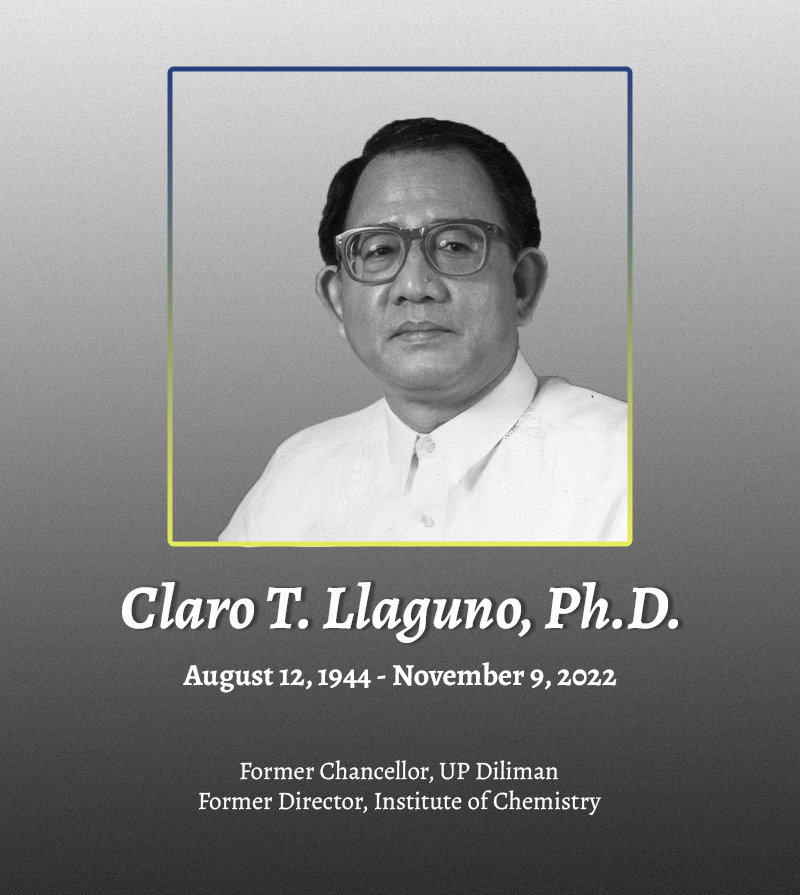 The UP Diliman College of Science joins the scientific community in mourning the passing of former UP Diliman Chancellor and former Director of the Institute of Chemistry Dr. Claro T. Llaguno, PhD.

Dr. Llaguno was one of the country’s foremost experts in Quantum Chemistry. He graduated with a bachelor’s degree in Chemistry from the Ateneo de Manila University in 1966 and obtained his doctoral degree from the University of Illinois, Urbana-Champaign in 1971. He then undertook post-doctoral studies at Brock University in Ontario in 1972. He was recognized as an honorary alumnus of UP by the UP College of Arts and Sciences Alumni Foundation (UP CASAF) in 1997.

Dr. Llaguno began his career at UPD-CS as an Associate Professor at the Department of Chemistry (now Institute of Chemistry) in 1977. He was the Assistant Dean for Academic Affairs of the College from 1984 to 1986, and was Chairman of the Department of Chemistry from 1986 to 1988 before he became the newly-formed Institute’s Director from 1988 to 1990. He was also a UPD Safety and Security Commission member from 1989 to 1993.

He was appointed UPD Vice Chancellor for Community Affairs in 1993 and served as Secretary of the University and the Board of Regents from 1995 to 1999.

Dr. Llaguno served as UPD Chancellor from 1996 to 1999. During his term, he implemented the Student Evaluation of Teachers (SET), the basic instrument used for evaluating the quality of instruction in the University still in use today. He also initiated the creation of the Office of the Vice-Chancellor for Research and Development (OVCRD) and the establishment of the College of Music’s Center for Ethnomusicology.

After stepping down from the Chancellorship, Dr. Llaguno served as Professor 12 at the Institute of Chemistry until his retirement in 2013.

Dr. Llaguno’s remains lie in state at the Agoncillo Room of La Funeraria Paz at Manila Memorial Park in Sucat, Parañaque. Interment will be on Sunday, November 13, at 3:00 PM, preceded by a mass in the Agoncillo room at 1:00 PM.