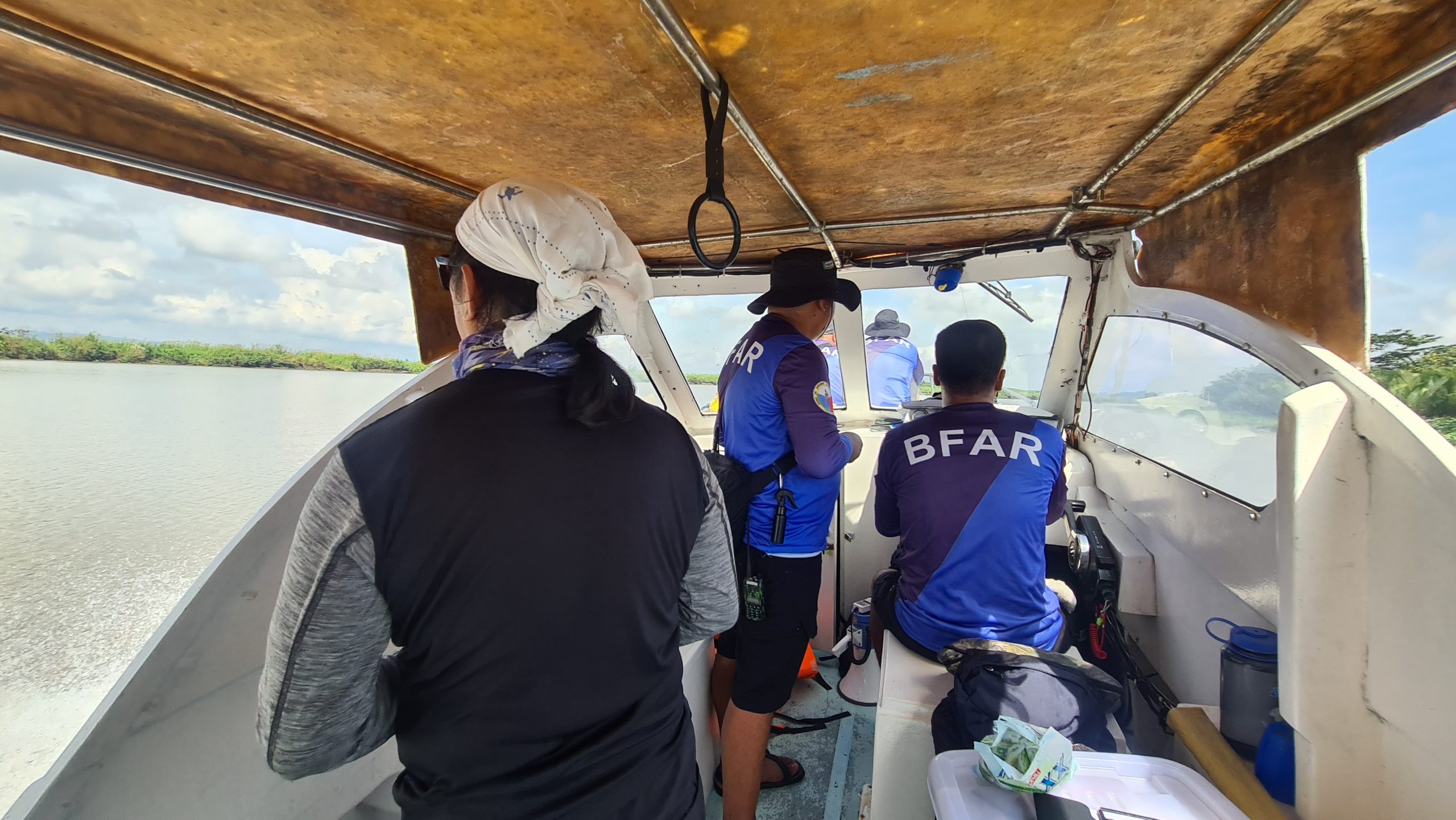 A joint team of researchers from the UPD-CS IESM and BFAR5 conduct a boat survey of the Bicol River as part of a reconnaissance trip in search of the rare and endangered Irrawaddy dolphin. (Photo credit: IESM/BFAR5)

Scientists from the University of the Philippines – Diliman College of Science (UPD-CS) are hot on the trail of a subpopulation of rare and endangered dolphins in the San Miguel Bay area in Bicol. Key Informant Interviews with local fisherfolk indicate that the dolphins may have been thriving there for decades, even while so far eluding capture and official documentation.

Last August 16, an Irrawaddy dolphin (Orcaella brevirostris) was found accidentally entangled and drowned in a fisherman’s net in San Miguel Bay off Calabanga, Camarines Sur. This was the first time that this species — considered critically endangered by the Philippine Department of Environment and Natural Resources (DENR) — had been found in the Eastern part (Pacific side) of the country.

Apart from other Irrawaddy dolphin populations scattered in South and Southeast Asia, all previous sightings in the Philippines were exclusively in the Western part of the archipelago: in Malampaya Sound, Palawan, and in the Iloilo-Guimaras-Negros Occidental area.

The new discovery prompted Dr. Lemnuel Aragones, a professor at the UPD-CS Institute of Environmental Science and Meteorology (IESM) and president of the Philippine Marine Mammals Stranding Network (PMMSN), to organize a reconnaissance trip in the hopes of finding more of these dolphins in the area.

From October 21 to 24, a joint team of researchers from the IESM and BFAR Regional Office 5 conducted opportunistic boat surveys and key informant interviews with local fisherfolk in areas surrounding the location of the initial Irrawaddy dolphin sighting and beyond (see map below).

From October 21 to 24, 2022, a joint reconnaissance team from the UPD-CS IESM and BFAR5 traversed the Bicol River from Camaligan to its mouth, which splits into Cabusao and Calabanga. The Tambang River was also surveyed by navigating through San Miguel Bay north of Calabanga, then eastward towards Tinambac, passing through Siruma, Camarines Sur, by boat. The team also made land trips to the areas of Mercedes and Vinzon’s-Talisay in Camarines Norte. (Photo credit: IESM)

The team carefully crafted open-ended questions for the interviewees, allowing the latter to describe the features of the dolphins that they saw, or still see, in their areas. The responses helped the researchers validate the species of the creatures in these sightings. Some of the informants noted telltale features that point to these being Irrawaddy dolphins — such as their small size (2-2.5 meters long); the absence of a beak; and a small rounded dorsal fin. Afterwards, the interviewees were shown pictures of Irrawaddy dolphins so they could confirm the actual appearance of the creatures they had seen. As an added step, the researchers also prudently documented the interviewees’ fishing grounds, gear, and catch.

Based on some local key informants’ long-term recollections, it seems that a subpopulation of Irrawaddy dolphins may be thriving in San Miguel Bay and seasonally visiting specific areas for several decades now.

“Some preliminary but important information derived from this recon trip includes the possible seasonal movement of the dolphins in response to prey abundance, and some localities have confirmed sighting these animals in their areas,” Aragones said.

“Our key informant interviewees provided preliminary information which showed that these animals may have been in the area since the 1960s, and are usually sighted in small groups of three to seven individuals. There’s even an exceptional sighting in 2021 of a group of over ten dolphins by a key informant from Tinambac, Camarines Sur,” he added.

Also, Aragones said that “the locals just referred to them as dolphins, and this might have been the reason why they all along thought that they were just the usual ordinary ones often sighted offshore.” 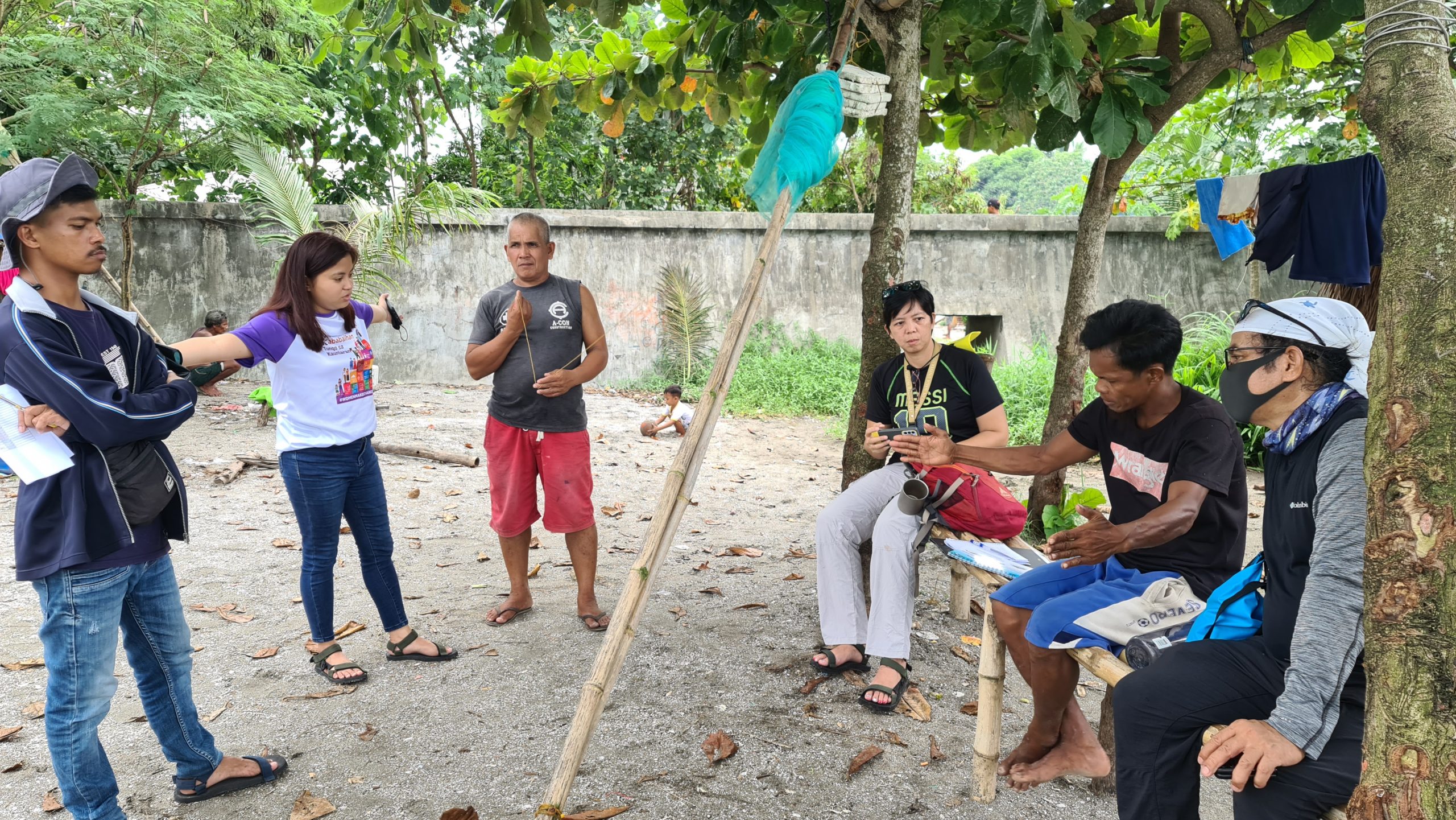 Researchers from the UPD-CS IESM and BFAR5 listen to one of their key informant interviewees describe his sighting of what experts believe to be rare and endangered Irrawaddy dolphins. (Photo credit: IESM/BFAR5)

Moreover, careful measurements of the temperature, salinity, and depth of the waters surrounding Tinambac point to an environment that is conducive to attracting Irrawaddy dolphins.

“The combination of the shallow depth of the Bay; nearby islands; isolated embayment; the wide range of available possible prey items such as small fish and crustaceans; and the wide range of salinities in San Miguel Bay, are some of the features that enable the Irrawaddy dolphins to thrive in this area,” Aragones explained.

The reconnaissance trip was part of the IESM’s Assessment and Mobilization of Research Initiatives on Philippine Marine Mammals (PHLMarMams) Project funded by the Department of Science and Technology – Philippine Council for Agriculture, Aquatic and Natural Resources Research and Development (DOST-PCAARRD).

A full-blown survey to possibly quantify the relative abundance and range of distribution of Irrawaddy dolphins in San Miguel Bay and adjacent areas is scheduled for early 2023.

For interviews and further information, you may contact IESM Professor and PMMSN President Dr. Lemnuel Aragones via mobile no. (0928)5018226 or email laragones@iesm.upd.edu.ph; and BFAR5 Fisheries Resource Management Section Chief Nonie Enolva at mobile no. (0915)9316884.