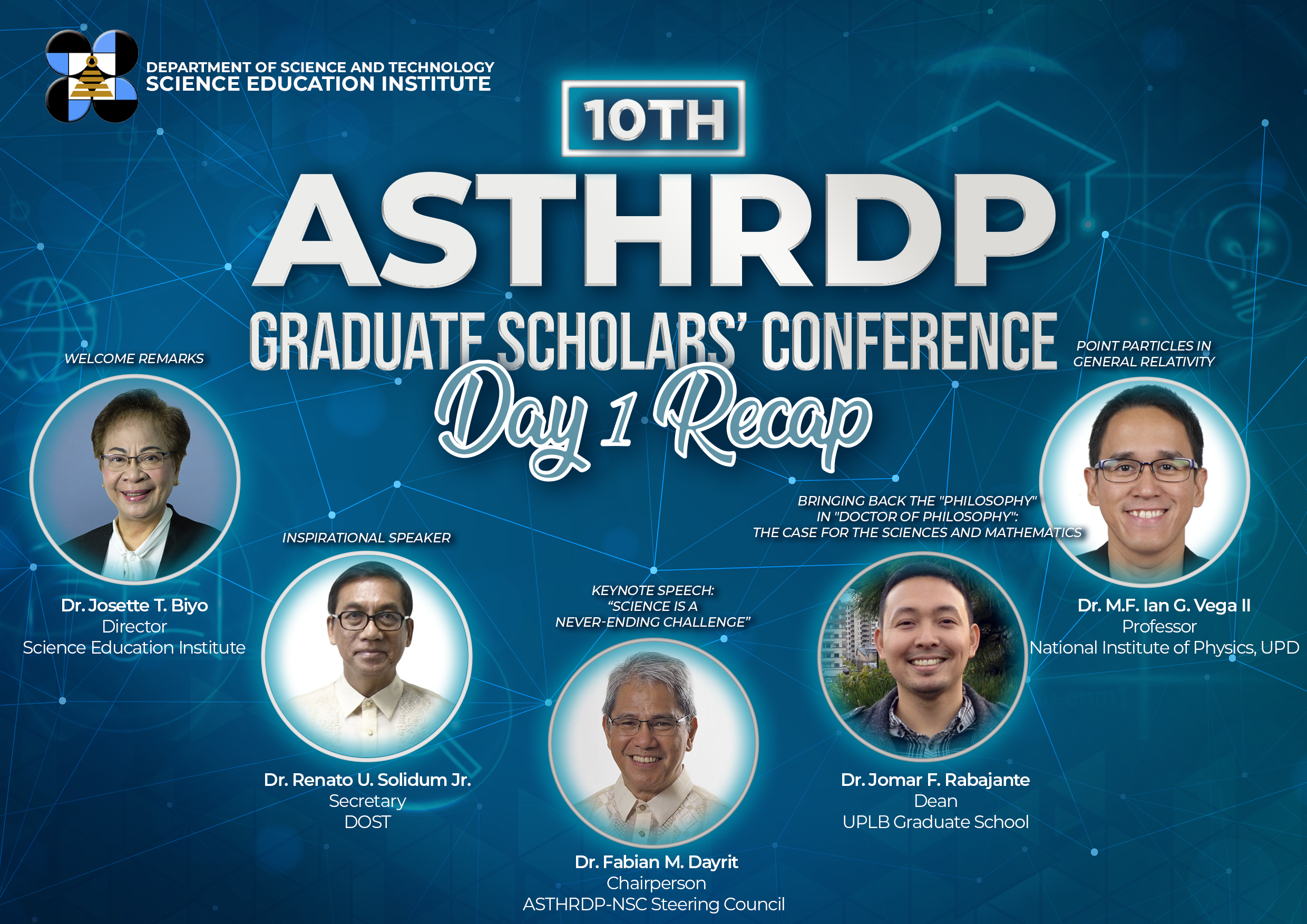 A Summary of the Proceedings of the 10th ASTHRDP Conference: Day 1

The first day of the conference opened with welcoming remarks from DOST-SEI Director Josette T. Biyo, who touched on the event’s theme, “ASTHRDP: 10 Years of Sustaining Excellence,” by underscoring the continued excellence of the ASTHRDP’s scholars through the years even despite the pandemic: “They always go the extra mile, and this event proves that,” she said. Citing in-house survey data, she pointed out that in the years 2015 to 2018 alone, the number of R&D personnel jumped 200% from 25,000 to 75,000. And despite setbacks from the pandemic, the country’s research community has continued to grow and thrive largely because of initiatives like the ASTHRDP.

The opening was also graced by the presence of DOST Sec. Renato Solidum Jr., who praised the ASTHRDP scholars for persevering through and overcoming the challenges of the pandemic for the greater good. “We need your expertise to move forward and pursue research, not just for academic reasons but for the value it can bring to mankind… Maraming salamat!” Solidum said in praise of the scholars.

For his keynote address, “Science is a Never-Ending Challenge,” ASTHRDP-NSC Steering Council Chair Dr. Fabian M. Dayrit congratulated the ASTHRDP scholars for their key role in building up the Philippines’ research capability. He pointed out that, to date, the ASTHRDP accounts for some 50% of the country’s graduate scholars, comprised mostly of MS degrees but with an ongoing effort to increase the country’s PhD scholars as well. Further in his talk, Dr. Dayrit doubled back on the unprecedented challenges of recent years by exhorting the audience to always remember that provisionality and adaptation are fundamental to the practice of science. Moreover, he noted the importance of scientists and researchers in confronting the challenges of our time, from biodiversity protection and climate change mitigation to overpopulation and food security. A cooperative and multidisciplinal approach is essential, according to Dr. Dayrit: “Any one science cannot do it alone. We should stop working in silos,” he advised.

In the first plenary session of the day, UPLB Graduate School Dean Dr. Jomar Rabajante gave an overview of the growth of mathematics from ancient times through to the twenty-first century, and what this growth of ideas has to teach today’s researchers in a post-truth and post-pandemic world. His talk, “Bringing back the ‘Philosophy’ in ‘Doctor of Philosophy’” touched on the paradigm shifts that have changed the way science is understood and pursued. Citing philosopher Karl Popper’s notion of falsification, Dr. Rabajante stressed the importance of continually testing established ideas. “Science is dynamic and we can continuously innovate and grow as human beings,” he said. “Testing is part of our job as scientists. But we must also teach, not just how and when but also why – in other words, the philosophy behind the science.” In the Q&A session that followed, when asked about how best to improve public appreciation of science, Dr. Rabajante pointed to the need for early education: “We should train people to know what’s scientific and non-scientific. Gawin natin sa simula. Sa elementary and high school pa lamang, doon ang laban,” he said.

The second plenary talk, delivered by NIP Prof. Dr. M. F. Ian G. Vega II was titled, “Point particles in general relativity.” Vega talked about how Einstein’s relativity led to the discovery and eventual visualization of black holes. The Nobel Prizewinning discoveries of recent years would not have been possible, according to Vega, without the collaborative efforts of multiple researchers from around the world over many decades. “Modern advances have brought us to a new golden age in physics, but there are still a lot of problems that still need to be addressed,” he mused. Reiterating ideas raised in previous talks, Vega said that collaboration and dedication to research are essential to the growth of human knowledge. “There’s something to be said of the bravery of experimentalists who are willing to undertake these experiments over a very long time, because these are the kinds of experiments that often bring surprising results,” he explained.

The plenary talks were capped by a brief photo session, followed by the presentation of ASTHRDP scholars’ work in simultaneous oral and poster breakout sessions in the afternoon.